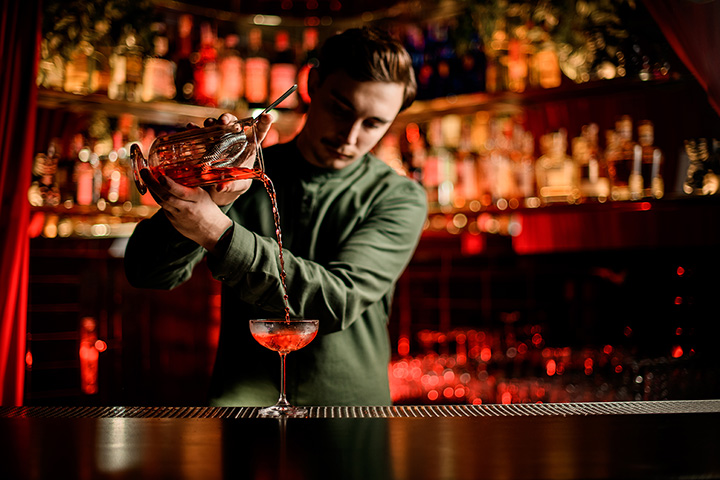 Much of Wyoming might be natural wilderness, but in populated areas, there’s no shortage of fun bars where you can blow off steam. For a change of pace, check out these top speakeasies and speakeasy-style bars in Wyoming.

While there are many modern speakeasies that replicate the look and feel of Prohibition-area watering holes, the Mint Bar is the real deal. The bar originally opened in 1907, but when Prohibition began, it was forced to rebrand as a cigar company and soda shop. Not to be deterred, though, the bar maintained a secret speakeasy in the back of this shop, and today, it’s back to being a lively and popular local bar.

The Speakeasy of the Historic Hotel Greybull, Greybull, WY

The Historic Hotel Greybull is one of Greybull’s best-known establishments. On top of being a hotel and conference center, it’s home to The Speakeasy. Technically, The Speakeasy is a restaurant, but it still embodies the vibe of a fun and historic covert bar, and it serves up a mean cocktail too.

In cozy Cody, the Proprietress is many things: a market, an event space, and, best of all, a fantastic bar. Like the speakeasies of old, The Proprietress specializes in exquisite craft cocktails and a sophisticated atmosphere.

Relaxed, casual spots can be fun, but every so often, it’s exciting to dress up and go somewhere classy on a night out. If you’re in Casper, you’ll find a classy speakeasy-like setting at Vintage Fine Wine and Martini Bar.

Speakeasies are treasured, in part, for their harkening back to the 1920s. In Wyoming, though, the ‘20s weren’t just about Prohibition; the Wild West was still in its heyday. If you’re looking to travel back to this era of history in a distinctly “American West” type of way, the Million Dollar Cowboy Bar is the place to go.

At first glance, Miners and Stockman’s doesn’t seem to fit into the same category as a traditional speakeasy, with its highly rustic feel and the fact that it’s known more for its steak than its drinks. In truth, though, Miners and Stockman’s is just as much a part of Wyoming history as any speakeasy because it is the oldest bar in the state. And, while you can see that age in its exterior, the inside of this steakhouse has all the class and mystique of a stereotypical speakeasy.

The Wyoming Secret Cocktail Society isn’t a brick-and-mortar speakeasy or a building at all. Instead, it centers on maintaining the key aspects of a speakeasy: a secretive yet close community and an undying appreciation for outstanding cocktails. This exclusive crew in Casper is essentially a living speakeasy operating today.

Dillinger’s may not be a secret, but as a top-quality cocktail bar, it has the vibe everyone is looking for when they want to go to a speakeasy. In fact, this upscale bar even has a speakeasy variety show on a regular basis.

View more Wyoming Bars and Saloons.
Select a Wyoming town to find
the Best Things-To-Do and Places To Go around you